T.I. gets B.o.B, Kendrick Lamar and Kris Stephens for his new single “Memories Back Then” off Hustle Gang: Get Dough Or Die album. Look out for more from the Hustle Gang.

Tyler drops a preview to the official music video of “Bimmer” off his Wolf album which you can pre-order here. Follow him @fucktyler.

Drake puts our home town of TORONTO on the map with the official music video for “Started From The Bottom”. The video shows the essence of Toronto with the CN Tower, the big 50 cm snowstorm we just had over the weekend and our favourite pharmacy, Shoppers Drug Mart. Shout out to the whole OVO movement and congrats to Drake’s second album “Take Care” on winning a Grammy for Best Rap Album of the Year.

Highsnobiety TV: A Conversation with Woodkid

Highsnobiety interviews Woodkid and he discusses topics like the inspiration behind his cinematic music videos and going on tour. Pre-Order his album “The Golden Age” now at http://www.itunes.apple.com/fr/artist/woodkid/id423849908.

Drake “Started From The Bottom” | MP3

Drake finally drops some new music off his upcoming album, which still doesn’t have a title yet. The new single is called “Started From The Bottom” and a new music video is in the works.

Pusha T releases a new single of his “Wrath of Caine” album. Look out for that album coming soon and follow Pusha @PUSHA_T and Wale @Wale

Big Sean first performs “I Do It”, then he brings out Kanye to perform “Marvin Gaye and Chardaonnay”. Kanye is also sporting his Custom Snakeskin Snapback. 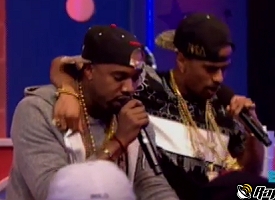